Skip to content
November 22
While I have not traveled home for thanksgiving since moving here in ’05, Jamie and I have made a few memorable trips; Yosemite, Big Sur and Mendocino; sometimes sleeping in a cabin, other times in a yurt.  This year, we selected a nice looking house up the coast in Mendocino, balancing our desire for ocean views and a soaking tub with a flexible AirBNB cancellation policy.
After attending Noah’s Thanksgiving feast at school, where I was the only Dad in attendance, we departed just after 11AM.  We beat most of the traffic North, and stopped for a tasty lunch at the Hamburger Ranch & BBQ in Cloverdale.  From there, the road climbed the mountains along route 128 wine country before venturing through redwood forests and eventually letting us out on the famed coastal Route 1, where the usual jaw-dropping ocean views greeted us.
We arrived in Irish Beach around mid afternoon and where pleased on arrival…mostly. The views were as advertised and the house was larger then you would expect for a 2BR, but there was a bit of a musty smell that I believe is to be expected in such a damp climate.  The decor was dated and the beds left something to be desired, but that didn’t stop our fun.

Noah and Eli began running laps around the house while I unpacked the food and Jamie the clothing and toys.  They found small nooks to play in and were soon bouncing off the beds.  We spotted deer in the yard! 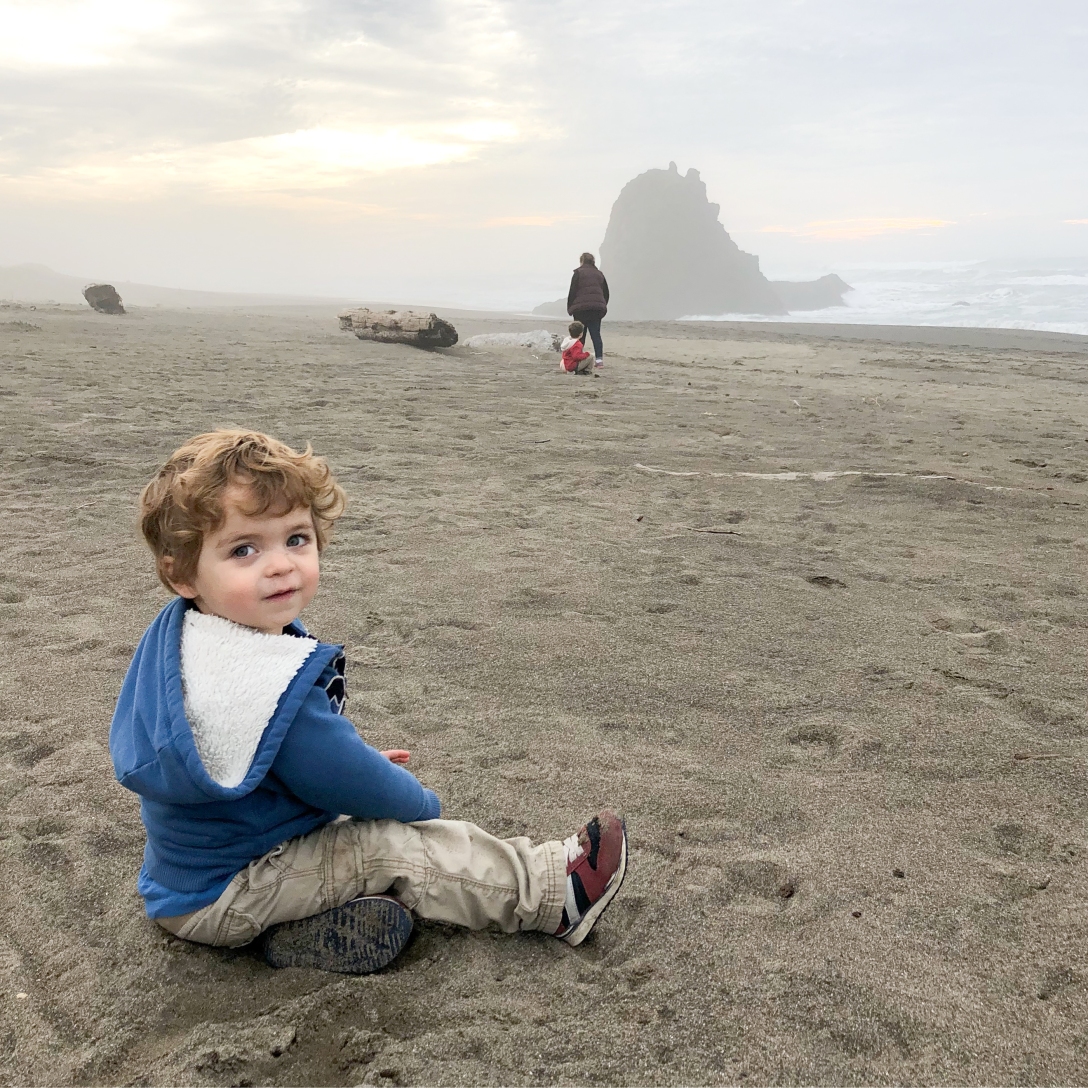 While the sun was still out, we made our way out into the community which consisted of a handful of houses overlooking the water.  Irish Beach has a private drive down to a small beach that was remarkably empty.  We played in the sand while surrounded by a cool afternoon haze, never once turning our back on the ocean.  You can’t trust the Pacific up here, the seas are always dramatic.

For dinner, I reheated beef stew that I’d prepared earlier that week and topped it with sour cream and corn chips.  After dinner, the boys were in heaven to find a large jacuzzi in the master bathroom, although Noah did not like the noise that the jets made.

November 23
Incredibly, we slept through most of the night, though it was not easy getting the boys to sleep in the same room.  For breakfast, I discovered a waffle iron in the kitchen and set about converting our pancake mix to batter.  Everybody loved the results and I knew that today would be worth giving thanks for.

For a morning outing, we tried going to the Point Arena lighthouse, but it was closed for the holiday.  Nearby we discovered the local KOA and it’s mildly entertaining playground.  Nearby, a family had a rotisserie turkey cooking in a weber kettle and it looked like it would be fine day for feasting!  We returned home for Eli’s nap and for me to begin preparing the festive meal.

Given our small crowd and unfamiliar surroundings, I kept it light: Smoked turkey pot pie, filet mignon, mashed sweet potato and cranberry.  The guest of honor, our dear friend Kasandra, brought stuffing.  The big eat took place around mid-afternoon and we were delighted by how nice the weather was.  So nice, that we sat at the kitchen table with the terrace door wide open, a rare occurrence on the oft-overcast Mendocino Coast.  Eli ate with his usual gusto, but Noah was only briefly interested and didn’t last long at the table.  I was content to enjoy much of the meal with the other two adults and let the boys play.

Before dessert, we returned to Irish beach to collect driftwood and play in the sand.  We found a really cool hut that someone had built and enjoyed balancing on the time worn logs.  Just as we were about to leave, a light haze melted off and the late day sun burned through in a glowing orange that was like almost like eclipse lighting. 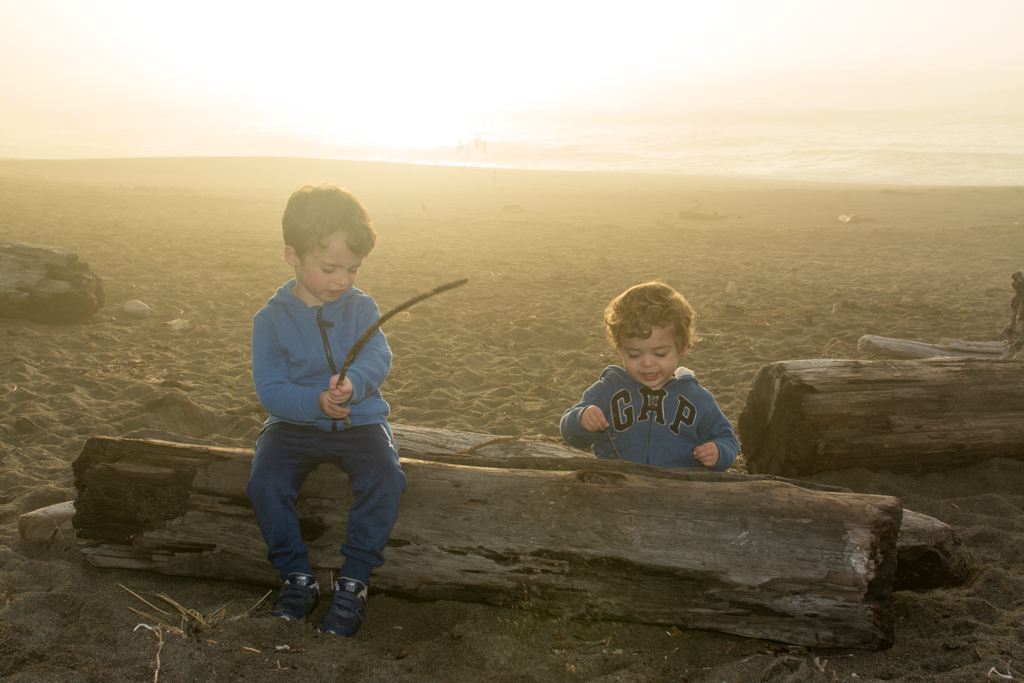 Glowing from the magic, we retuned home to fuel up on Jamie’s amazing homemade pumpkin pie for dessert.  To switch things up a bit, I headed into town to meet up with a few locals at the grange, while Jamie and Kasandra worked on bed time.  When I returned, the boys were asleep so we built a huge fire and stayed up late chatting by the crackling logs.

Another night of mostly good sleep, but this night found the boys in the master bedroom with Jamie and me in the kids room.  We tried putting Noah in there solo, but he came running down the hall screaming at 2AM and demanding my spot.  I was too tired to argue.
November 24

Breakfast today consisted of….A STUFFING WAFFLE.  OMG, there is nothing like it.  You take leftover stuffing and brown it in a waffle iron and top it with maple syrup or cranberry.  You may think I’m crazy, but unless you try it, you will never know the truth. 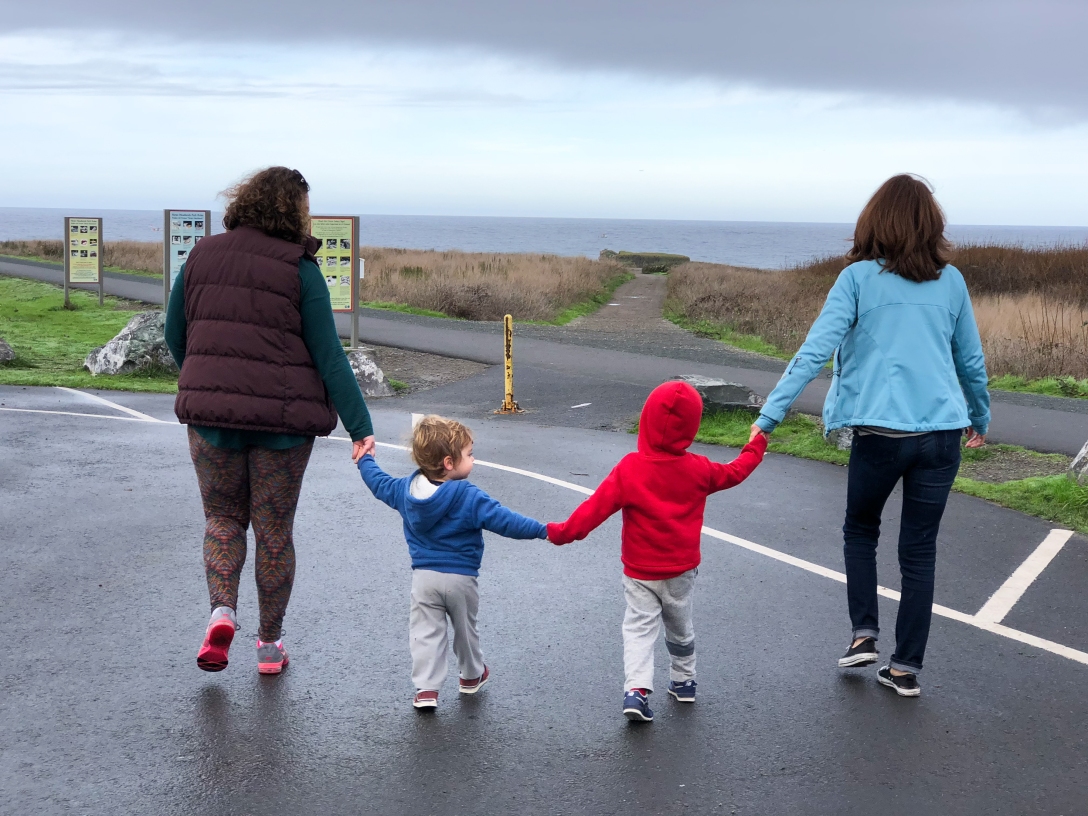 Friday was our day to be OUTSIDE and explore mendo, so we headed north to the town for Fort Bragg, starting early at Glass Beach just in time for low tide.  In an era that was a sad time for humanity and conservation, Fort Bragg used to have a “Water dump site” where they tossed garbage in massive quantities on the beach.  The area has since been cleaned up, well mostly, and mixed in with the beach sand are massive amounts of brightly colored, rounded sea glass.  Noah loved digging for the colorful glass as did Jamie and Kasandra.  Each boy took a turn riding on my back and went for a scramble around the rocks to explore tide pools. 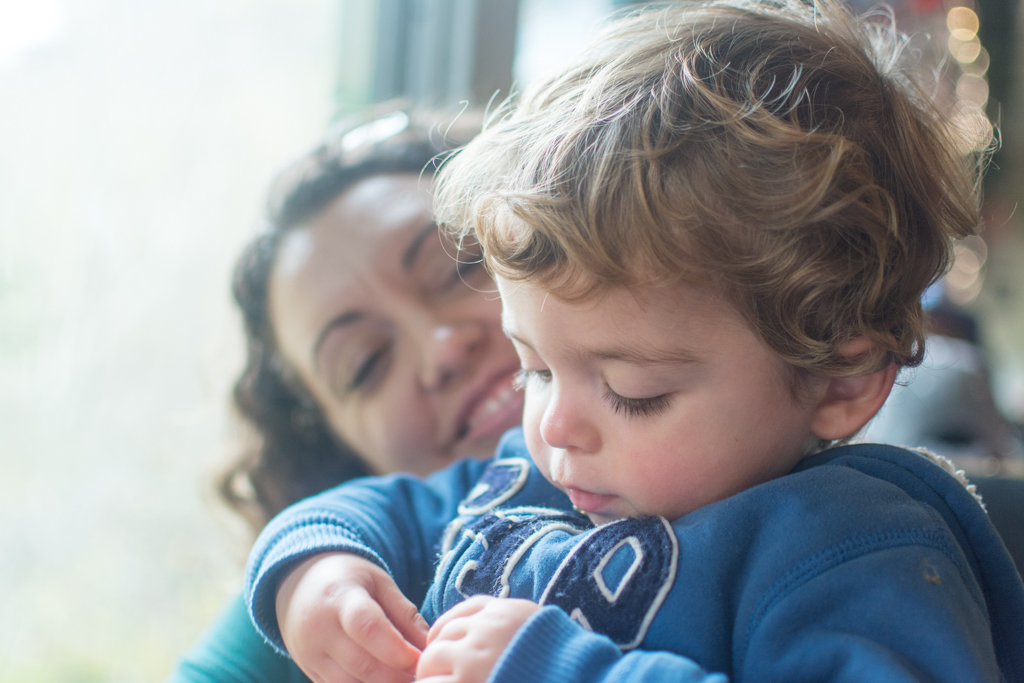 By this point, Noah was starting to buddy up with Kasandra and insisting on holding her hand.  It was very sweet.  After that, the girls visited a store in town, which I refused to shop at on Black Friday!  For lunch Kassandra treated us to a delicious lunch at Cucina Verona and the boys treated her to pre-meal arts and crafts.

Then came the highlight of the day: the Skunk train!  The California Western Railroad runs a heritage railroad that makes a 1 hour there-and-back ride through a redwood forrest.  One of the cars is open air and another car serves popcorn.  The views were spectacular and we were excited to find a new patch for our collection in the gift shop afterwards.

Returning home, we were pretty beat from our outing and time in the car.  We spent the afternoon mostly lounging and playing.  Eli accompanied me on a brief walk around the Irish Beach neighborhood.  Dinner consisted of various leftovers and both boys howled screams of protest to start the meal; despite the layer of melted marshmallow atop the sweet potato.  The boys went down smoothly at 7 and Jamie and I stayed up, lounging by the fireplace.
November 25
Waking just a little later than normal, Jamie and I worked to pack out the house and load up the car.  Rather than cook and clean, we opted for breakfast at the Rollerville Cafe in Point Arena.  This quaint, family run greasy-spoon offered hearty portions of breakfast classics that filled our tummies. 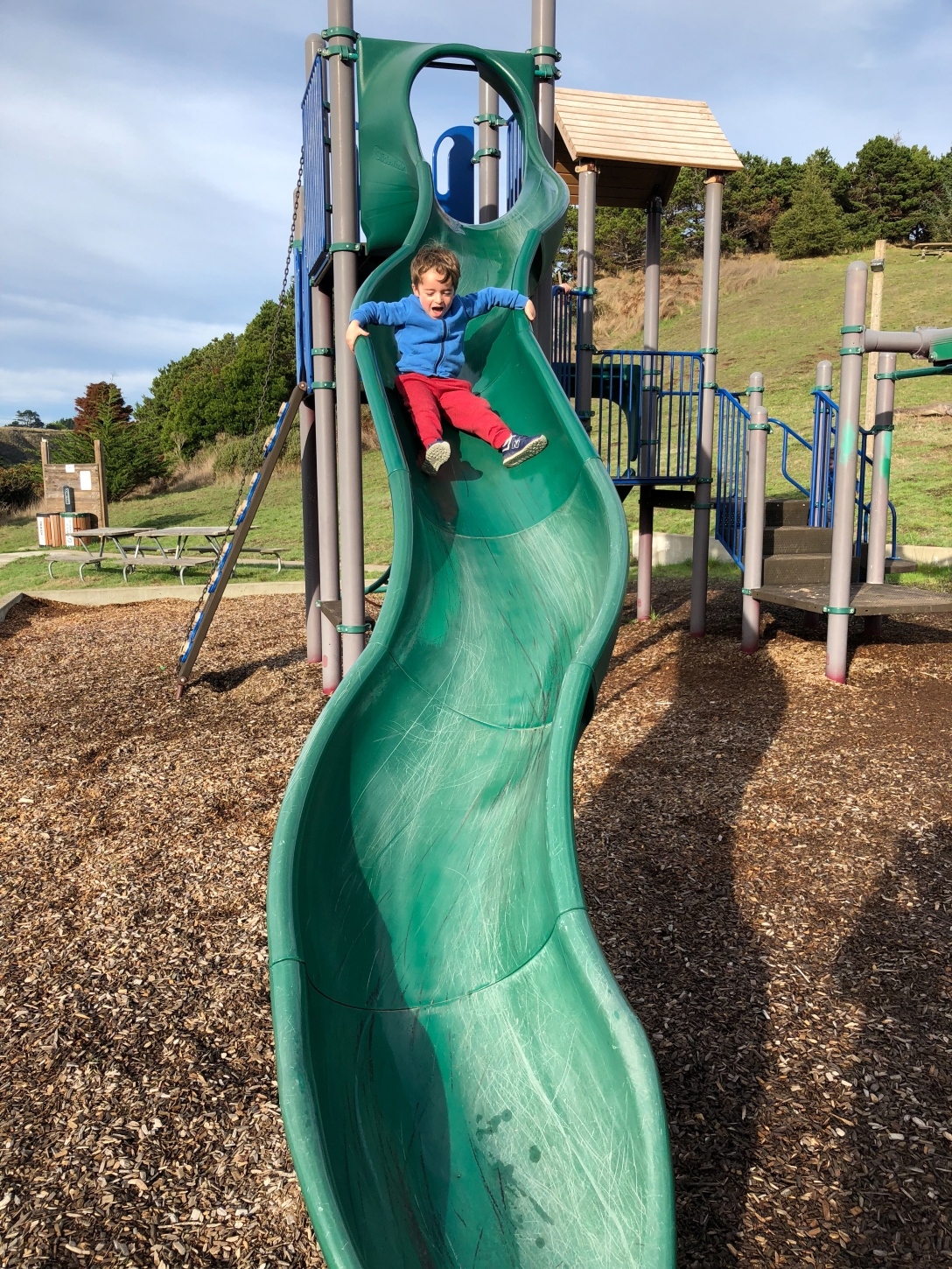 From there, we found a playground they had told us about at the Rollerville.  Huge slides and nary a local in sight, the boys were thrilled to work off some morning energy.
Waiting out front at 10AM, we were first to enter our last adventure of the trip: The Point Arena Lighthouse.  We walked the museum, and learned all about the history of this key naval marker.  The current lighthouse was built in 1908, as the original did not survive the big quake of ’06, and contained a 1st order fresnal lens that was over 6 feet in diameter, weighed 6 tons and contained 666 hand ground glass prisms.  Worth over $3.5 million, it is now the centerpiece of the museum. 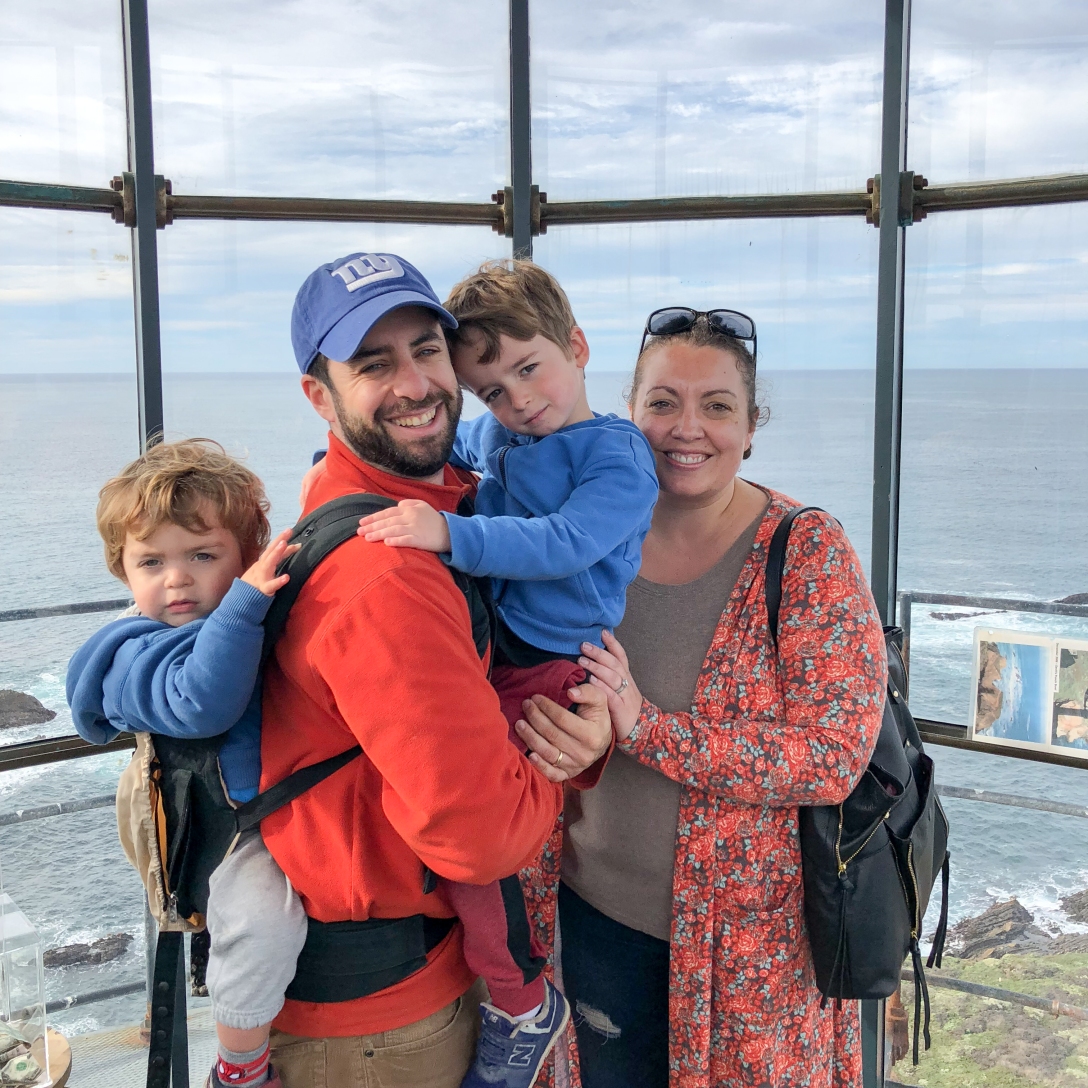 No trip would be complete without a climb up the 147 step winding staircase of the lighthouse!  With Elijah on my back, and Noah soon to be in Jamie’s arms we ascended to the top.  Noah bravely climbed the final ladder into the top, but had to be enticed to climb down on his own with an offer of a new ’stuffy.’  We found one more patch for our collection, along with a new turtle for Noah in the museum gift shop.

On that note, we started the 3.5 hour drive home, making just one stop for a fast lunch.  We didn’t hit much traffic, just like the ride in.
Part of me regrets not hosting or joining a large thanksgiving feast.  I have gathered around larger tables in my life, and Facebook was certainly plastered with wonderful pictures of other families.  I have hosted Thanksgivings in our own home and not only enjoyed the challenge of serving a delicious, creative meal, but also relished gathering groups of friends and family around our table.  I’m thankful for those memories.
For me though, having a wonderful wife and our two boys is more than enough to fill my plate.  Not having to spend hours fighting traffic, dealing with airport delays, and all of that noise is a reward in itself.  Financially, you can’t beat the math on a trip that cost roughly $1,000 in total versus what those flights might’ve added up to.  Who knows, maybe next year we’ll do something bigger…or maybe we’ll be out on the coast again? 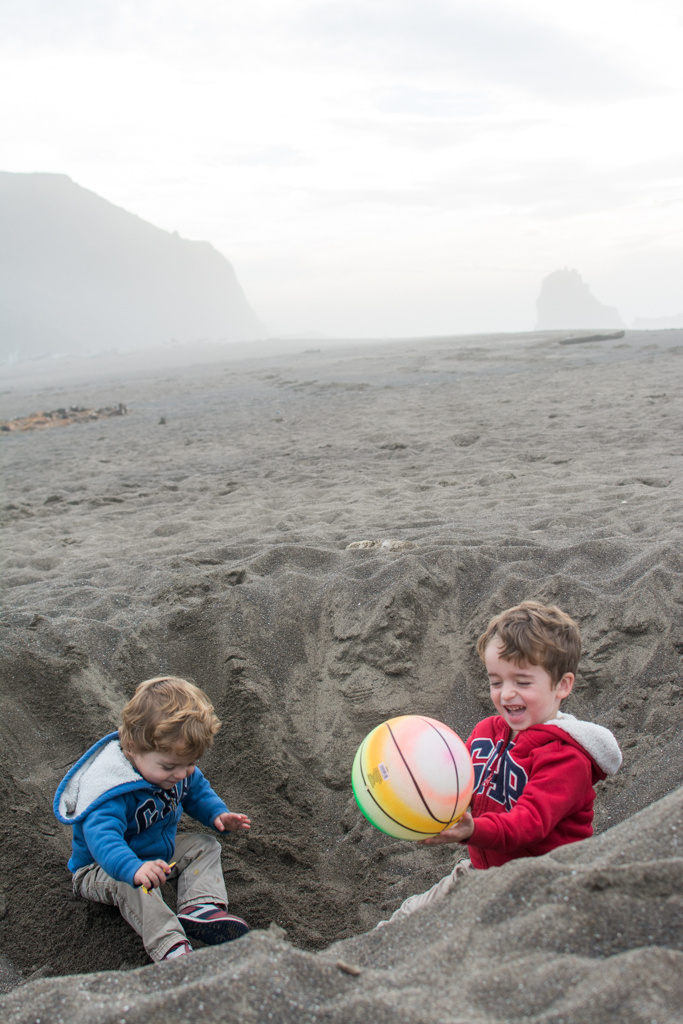